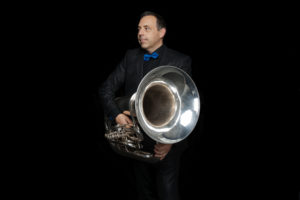 Eric Rey was born in the heart of the Swiss Alps in Valais in 1971. Early on, he began studying tuba, and actively integrates the ranks of various Swiss Brass Bands of international renown.

His professional studies are completed at the Geneva University of Music in the class of Pierre Pilloud, where he successively obtained a teaching degree, a master with distinction and finally a degree in orchestral performance with mention. His studies were also crowned by the Friends of the academy award, first awarded to a tuba player. In masterclasses, he had the opportunity to follow classes with Roger Bobo and Mel Culbertson. Later, his interest was soon directed to the orchestra and he became for a season, first tuba in the symphony orchestra of Durban (South Africa).

Back in Europe, he became a freelance musician and work on a regular basis in orchestras like Orchestre de la Suisse Romande, Orchestre de Chambre de Neuchâtel, Contrechamps or Sinfonietta de Lausanne. Eric is also a teacher in several music schools and works with various brass ensembles in western Switzerland. He is a founding member of GENEVA BRASS.